Messing with British Institutions: The Fish and Chip Brit Pot

Messing with a British institution is a dangerous game. Putting Fish & Chips into a microwavable pot is a bit like giving Dame Maggie Smith a Mohican. We went ahead and did it anyway, and we’re pretty proud of the results too.

As Brits, Fish & Chips, occupy a very special place in our hearts. Fish & Chips even managed to slip past McDonald’s Olympic dictatorchip, making its way onto the stadium menu as a classic British dish.  No easy feat, as any Stratford-based chip vendors will contest.

Calling up memories of rainy day trips to the Great British beach with every mouthful, it’s no wonder that people have such a personal interest in defining what exactly goes into making the “perfect” Fish & Chips. Here’s our take on the British classic:

Once upon a time it might have been the only way our parents could get us to eat fish, but it has remained our favourite way of guzzling our gill-bearing friends.

We didn’t want to get too caught up in the cod vs haddock debate, so we went with the majority vote. While haddock is the top choice for the Scots, it’s cod that wins out in England making up 61.5% of our consumption....

My co-founder and very dear friend, Dale, is a man of many talents. In addition to his skills in the kitchen, he is a legendary DJ (the legend reaching as far as his local pub), and as enthusiastic a participant in fancy dress as you’re likely to find. So when we needed someone to don a Second World War pilot’s uniform to promote our epic new Steak & Spitfire Ale Pie, there was only one man to turn to. I think he looks rather dashing in our tribute to Douglas Bader in Reach For The Sky (right) – like a cockney Kenneth More. (Vote on our Facebook page here if you think they were separated at birth!) 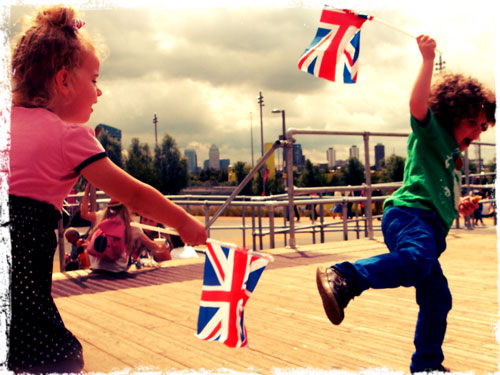 There has been an abundance of British cheer in the entries to our Summer Sharing Photo Competition. It seems we've been feeling very patriotic this summer despite all of the rain. Who can blame us? There has certainly been plenty to celebrate. With photographs of Olympic gold rush joy, Jubilee celebrations, muddy festivals and rainy days at the Great British beach, we thought your photos succeeded in capturing the spirit of the summer.

An album of our top ten entries for August can now be found on our Facebook page and here's a little video tribute to a Great British Summer with a few of our favourites!

Recently many inspiring Great Britons have captured our imaginations. There has been so much buzz surrounding the Olympics that the athletes have become more than household names, they are now national heroes. If COOK Co-founder Edward’s daughter Daisy is anything to go by, then the tag line ‘Inspire a Generation’ has certainly done the trick; recent conversations centred around whether she should take part in the high jump or the gymnastics when she is older.

Athletes have been replacing reality TV stars in the gossip magazines, and there have even been rumours that Olympic heroes Jessica Ennis, Mo Farah, Chris Hoy and Bradley Wiggins are being enlisted to help mentor X Factor contestants.

But our British athletes have been getting lots of attention, and we believe that there are a lot of unsung Great Britons out there who deserve their praises singing too. To celebrate the arrival of our Brit Pots this month, we're looking for unsung Great Britons who deserve a bit of recognition and a tasty treat from COOK to sustain them in their Greatness. We've got £1000 worth of COOK vouchers to give away (£100 for 10 deserving Great Britons).

It might be a family member, a friend, neighbour or somebody you pass in the street every day - they just need to do some great stuff and be deserving of a pat on the back and a little reward from out of the blue.

Nominate an unsung Great Briton using the form below...